LEADER OF LE PARTI QUÉBÉCOIS IN 2015 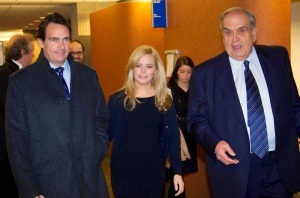 By Bernard Bujold (LeStudio1) –
Members of the Parti Québécois will elect their next leader from Wednesday, May 13, 2015 and normally we will know the result on Friday night May 15 at 9 pm.
Personally, I am what could be called apolitical in the sense that I am not a member of any political party. I do not like the idea of ​​a party but I favor political people according to their personality. When I supported Brian Mulroney in 1984 in Ottawa, it was not for his political party but because of his personality and what I considered an exceptional dynamism.
At the beginning of this PQ campaign, if I had been an active member of the party, my vote would have gone to Jean-François Lisée. He had the profile of a prime minister.
Currently, I deeply wish that Alexander Cloutier wins the race.
I get an average of one email a week since the announcement of the entry into politics of Pierre-Karl Péladeau, wondering why I am not supporting him since I was very close to his father for who I was Executive Assistant until the end of his life.  He even fell into a coma in front of me, on December 2, 1997, almost in my arms, on the floor of his office Quebecor…
I loved the man who was Pierre Péladeau (the father) and we had a very profound loyalty towards each other.
Pierre Péladeau died officially on December 24, 1997 and on January 5, 1998, Quebecor’s new senior management immediately thanked me for my services with the clear and precise message that they did not want to see me around anywhere in the enterprise.
I was deeply sad by this…
In addition, it was the Quebec ice storm…
The darkness and the cold of the New Year; the death of my mentor; and becoming an unemployed!
In the months after my dismissal from Quebecor, people that I knew closely, including a leader of a large Quebec company (from the Quebec Inc), told me that Jean Neveu the new CEO of Quebecor would have contacted them to denigrate me and to suggest not to hire me.
I checked this by Jean Neveu and he said, smiling, that he had the right to express his opinion and if I was not happy, just to sue him…
At the time, I did not want to spend money for lawyers in justice nor to pay to gather evidence because I thought it was better to look forward. But it was clear that others were investing efforts to monitor me (probably a private detective) because as soon as I went to a new potential employer interview, someone contacted them immediately. It was like if they were following me on track and that they were trying to prevent me from working!
I finally got an inescapable proof once and it was well documented because I got a job…
I got in early 2001 as a press attaché precisely with the government of Bernard Landry that I had known earlier when I was with Pierre Péladeau (the father). I had discreetly negotiated and when I started working, nobody really knew it. I started on a Monday morning (April 11, the date of birth of Pierre Péladeau…) but at 3 pm on the same day, the chief of staff invited me into her office saying she was sorry because she had just received a call from someone and if the Landry government kept me in the staff, it would do him trouble in the media …
The chief of staff told me that the order to fire me was coming from executives at Quebecor by means of a large PR agency in Montreal and, after bringing the matter to his attention, Bernard Landry said that he did not want to get involved…
She had no choice to do otherwise! – she repeated to me!
Later in time, early 2003, when I published my biography of Pierre Péladeau, my friend Michel Vastel told me that a senior officer at Quebecor asked him to try to get a copy before publication of the book I was writing about the father of PKP. Michel had refused the request by replying to the person asking that he was not playing this kind game, especially not with a former journalist like me, and worse, he knew me personally.
In short, if I do not support PKP the son, it is because I have my personal reasons!
The beauty of democracy is, however, that everyone is entitled to one vote.
If you are not happy with the result, you have a choice: change of city, province or country; or accept the outcome and live with the choice of the majority.
If ever Pierre Karl Péladeau became Premier of Quebec one day, I will have plenty of time to change territory but we are not yet at this result!
To be continued … and good luck Alexandre Cloutier!
Photo 1 and 2: Pierre Péladeau and Bernard Bujold;
Photo 3: Pierre Karl Peladeau, Julie Snyder and Jean Neveu;
Photo 4: Alexandre Cloutier;
SEE AUTOBIOGRAPHY PIERRE PÉLADEAU;

This entry was posted on Tuesday, May 12th, 2015 at 5:34 pm and is filed under Uncategorized. You can follow any responses to this entry through the RSS 2.0 feed. You can leave a response, or trackback from your own site.