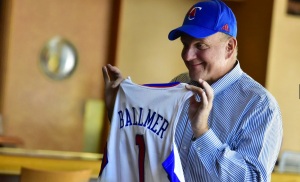 The story of how Steve Ballmer bought the basketball team THE CLIPPERS for $ 2 billion is like a television series.
Steve says that when he saw the $ 2 billion out of his bank account, then he was a little nervous to see the money disappear because he knew there was no turning back and it was for real… He was the new owner of a professional sports team and his 2 billion were spent! It’s a bit like a child who buys a new toy in exchange for a large part of his savings. The question that then arises: Do I made ​​a good decision…
(Ballmer’s fortune was estimated before buying Clippers to over $ 22 billion)
Photos 1, 2, 3 and 4: Steve Ballmer;
SEE STORY THE WALL STREET JOURNAL ;

This entry was posted on Thursday, August 28th, 2014 at 5:58 pm and is filed under Uncategorized. You can follow any responses to this entry through the RSS 2.0 feed. You can leave a response, or trackback from your own site.