The love story of Senator Boisvenu… 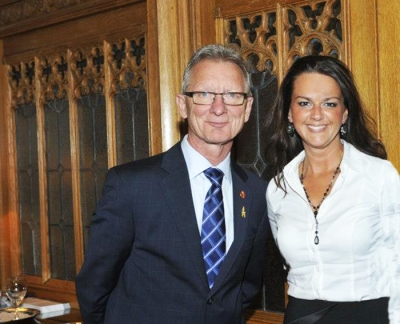 by Bernard Bujold (LeStudio1) –  The story of Senator Boisvenu is not unique. In fact it is a beautiful love story! The sadness of this case is that the media has tranformed the two lovers in newsmakers. But the fault is largely, even entirely, that the Senator should have been quickly and nimbly find employment elsewhere in Parliament for his assistant.
In this age of the internet, the secrets must be honest because if not and it goes public, then the scandal and humiliation in the public are resulting…
Picture: Senator Boisvenu and his assistant ;

See interview Senator Boisvenu:
by MARC PIGEON @ JOURNAL OF MONTREAL, Wednesday, March 27, 2013
Senator Pierre-Hugues Boisvenu swear he never stole a penny in the Senate and he is in politics for the cause and not for money. “I’m not a big lifestyle senator,” he says.”I’m not here for my pocket” Pierre-Hugues Boisvenu does not hide it: he fell in love with his assistant.
Forbidden love propelled him into a media storm which he struggles to escape.
In an interview given to Journal de Montreal this week, the 64 year old man felt the need to make the point. After the death of her daughter, Julie, who was assassinated in 2002, and her other daughter, Isabella, who died in a road accident in 2005, his marriage with his wife of 40 years, Diane Carlos, was floundering. – Is a couple can survive tragedies like the ones you had? – Eighty percent of couples separate. I think it is a miracle that has been 10 years.
Since 2006, he has put his relationship in question, he said. It is 2010, the year of his arrival in the Senate, his wife had ‘requested separation, “he said. “We were not at all in the same place in our lives, he said. I was in another world in terms of activities and achievements. ”
A few months later, Isabelle Lapointe was hired as an assistant at his office Senate. In addition to a great professional complicity, he developed a bond that slowly took the form of love. An attraction he confessed to his wife in the spring of 2011. But things were not so simple. One does not balance overboard relationship decades old like that.
“I felt very guilty of abandoning admits Boisvenu. Abandon a woman to 63 years for the general public, there is a notion of evil there. I wondered if I would stay again 20 years in this situation for her. And I said no. I decided to fill my life, be active and be happy. ” Senator speaks of Mrs. Carlos with great respect for his experience, for all the hardships she went through.
“Diane, it was very, very difficult. Julie she lost her mother, Isabelle, his father five years. And she had a cancer over that. I think it is a brave woman. ”
The year that followed was a year of “yo-yo,” he said, as he has tried to pick up the pieces of his marriage. But in early 2012, he had to face the facts: the couple was now doomed. Then, the relationship with his assistant has grown. “In my life, there was a gaping hole on the emotional level, he says, wiping his eyes. It happened what happened. This is a woman who was what I needed as dynamism. It was a very, very helpful. ”
But the rules of the Senate are cautious about such a relationship. In the summer of 2012, Mr. Boisvenu went to see the Senate ethics officer to explain the situation. And to avoid any appearance of conflict of interest, it has been suggested that his assistant be transferred to another office, if their relationship should continue.
“It’s easy to say but not easy to do, says Boisvenu. Isabelle was the heart of the office. It took a few months to reflect, discuss. ” Few months have stretched into early March. “I may have been imprudent, I’ll take the blame,” he said. Mr. Boisvenu said they had to take action when “the bomb fell.” Media made headlines with its binding, his divorce, his housing allowance, travel expenses and all that when checks were conducted on three senators. He also swears he had “never stolen a penny” in the Senate.
If his relationship with his assistant is currently in neutral since December, the media coverage of this connection, two weeks ago, has “broken” the climate between Mr. Boisvenu and his wife. “It came completely antagonize relations. We do not talk any more. We went from friends to almost enemies. And I take my share of responsibility. But it is something that is not normally in the public eyes. ”
See story Le Journal de Montreal ;

This entry was posted on Wednesday, March 27th, 2013 at 8:07 pm and is filed under Uncategorized. You can follow any responses to this entry through the RSS 2.0 feed. You can leave a response, or trackback from your own site.