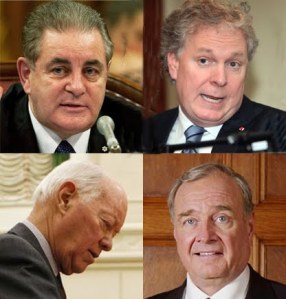 The story of Jacques Duchesneau is reminiscent of John Gomery.
In both cases, the two men are right in their arguments but they also like too much the glory of the moment.
Justice John Gomery enjoyed meeting the press after hearings and Jacques Duchesneau loves even more cameras.
A little modesty would make the debate more seriously!
One difference: Jean Charest is slower than Paul Martin in its reaction …
You have to read the interview in La Presse (Friday, September 30) with the former police chief Jacques Duchesneau.
He directly accused the journalists of TVA and the Journal de Montreal.
Duchesneau said he wants to resign and he even recommends Gomery to take his place!
One fact funny but disturbing for a former police officer: the interview took place at 10 pm by car during the return from Quebec to Montreal. Duchesneau drives his car quickly and, repeatedly, he uses his cell phone in one hand.
Is not it illegal to drive with one hand and holding his cell phone on the other … Quickly a ticket!
Photo 1: Jacques Duchesneau, Jean Charest, John Gomery and Paul Martin;
Photo 2: Jacques Duchesneau National Assembly;

Cooking according to the Italian fashion 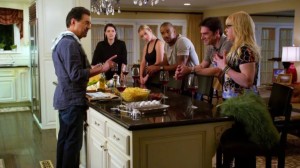 “The art of cooking is the most sensual of all the arts form …” – Actor Joe Mantegna’s character David Rossi in Criminal Minds.
A scene of a few minutes at the end of the second episode of the 2011 season of Criminal Minds sums up in words and picture what is the art of cooking, version italian. Here are some pictures of the scene that you can watch from 11 minutes 42 seconds on video.
Picture 1 and 2: Joe Mantagna and the Criminal Minds crew ;

See photo album and the video ;

Arnold Schwarzenegger is back… 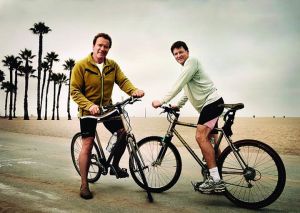 Arnold Schwarzenegger is back …
Vanity Fair magazine published an excellent interview on newsstands now.
Arnold surprised the journalist and he arrived at the interview but with Cadillac and a rusty old bike attached to the back of the SUV wearing a sweater a little rather tired and worn shoes.
The journalist had wanted to impress Arnold and had rented a luxury bike at $5,000 with a latest fashion sport suit …
Photo 1: Arnold Schwarzenegger;
See Vanity Fair interview ;

The new toy by Amazon…

The new toy (tablet) by Amazon will be offered at $ 199 …
Steve Jobs will have to return home to defend his Apple iPad!
Photo 1: Tablet by Amazon;
Photo 2: Steve Jobs and his iPad;
See story The Wall Street Journal ;
See story The New York Times ; 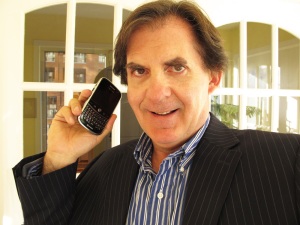 Chris Hughes is one of four founders of Facebook, with Harvard roommates Mark Zuckerberg, Dustin Moskovitz, and Eduardo Saverin. He was visiting Montreal (Tuesday, September 27, 2011) for a conference lunch.
Chris presented to the people there a resume of his career path from Facebook through Barack Obama until today. The young entrepreneur of 27 years has a fortune estimated at $ 700 million (shares in Facebook).
Asked about his vision for the future, he believes that there will be the creation of many new networks because people want to communicate.
Chris adds, however, that we must ask the question: what is the purpose of communication if not be a better world …
According to Chris Hughes, it is up to each of us to use the various communication tools to become a better person.

The Montreal Marathon 2011 according to Bernard Bujold 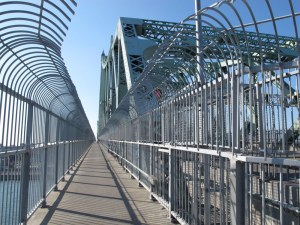 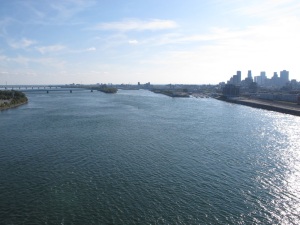 Not wanting to participate in the 2011 Montreal Marathon itself, but seeking to find a little action, Bernard Bujold has decided to replace the Marathon by a bike crossing on the Jacques Cartier Bridge.
The trip is relatively short but the traffic noise from cars and trucks, the height of the structure and especially its continuous movement (vibration of the structure) makes the crossing a little adventurous …
But it’s much less “tiring” than running a marathon.
Picture 1: Jacques Cartier Bridge ;